If you have not heard the magical name “Russel Brunson,” and his connection with internet marketing, then you must have been living under a rock. This man single-handedly created one of the greatest SaaS (software as a service) companies today which are used by millions of marketers worldwide.

Russell Brunson is the creator of ClickFunnels, a software that creates funnel pages for users. He is also the co-founder of Etison. ClickFunnels has generated millions of dollars for Russell as well as for many of the platform’s users since it was launched in 2014.

In this article, you will learn all the information you need to know about this astute businessman called Russel Brunson, his net worth, and what makes him tick as an internet entrepreneur.

Without wasting much of our time, let’s dive in!

Who is Russell Brunson?

Russell Brunson was born in 1980 in a city in north-central Utah which is known as Provo, in the United States. He grew up in Utah, and his love for sales and marketing developed right from an early age.

Russell grew up just like any other kid. He loved watching cartoons, and TV and even collected junk mail since he was 12 years old. Brunson always studied redio advertisements and TV commercialsad to learn how they work. He found the “art and science of direct response” quite intriguing.

However, Russell had an uncanny interest in the sales and marketing entertainment that was showcased on the TV. He ended up opting for a business career, though he had a brief stint with arts and science. His interest was solely in business, and soon, he started trying his hands-on sales and marketing.

Soon enough, Russell developed lots of interest in several business opportunities that came his way. He was a highly competitive individual, and this was made known when he became a wrestler in high school.

Russell received the All-American honours at the Utah 5A State Championship. He also took the second position during the High School Nationals in his senior year and went on to wrestle in college at Brigham Young University as well.

Russell met his wife, Collette, while he was at Boise State University and they are blessed with five lovely children.

His love for his children always spurs him on to help other young individuals who are experiencing difficult childhoods. This is the empathy that subsequently became the basis for his contribution to humanitarian services.

Apart from his interest in making young people highly productive, Russell is also committed to matters of community building and philanthropy. He currently runs a charity arm at ClickFunnels which funds not-for-profit entities such as World Teacher Aid, etc.

Russel has creatively customised his business operations in such a way that whenever a new funnel becomes active, one dollar is donated to charity. He has also stretched his charity operations beyond the United States to Africa.

Moreover, since his foray into the African continent and deep involvement in community activities, Russell has been able to build several schools in Africa. His goal in doing this is to promote education in low-income settings.

Russell has also shown a keen interest in matters that have to do with sex trafficking, which is a vice that has become a menace in society. This is the primary reason why his company is currently developing a documentary – known as Operation Underground Railroad – to address and raise awareness of these heinous actions.

Russell Brunson’s Net Worth In 2022

Russell is also recognized for popularising the concept of sales funnels through his innovative software venture known as ClickFunnels.

Russell Brunson’s net worth is $37 million. Although this self-made millionaire has made an excellent career in app development as well as the blogging niche, his most successful venture remains ClickFunnels. The SaaS business is worth almost $400 million.

Russel co-founded the company, ClickFunnels, with a fellow entrepreneur called Todd Dickerson and the company has grown in leaps over the years.

The SaaS platform is currently used by more than 55,000 users and is known to have generated sales worth several hundreds of millions of dollars. He is also the Head of Marketing and CEO of ClickFunnels.

However, this is not Russell’s only source of income. He has several ventures which have proven what his Forbes profile says about him: Russell is a highly successful internet marketing expert. He has received lots of praise from Grant Cardone and Tony Robbins, who are also world-renowned entrepreneurs as well.

Most of Russell’s wealth is believed to have been generated from this ground-breaking venture. This incredible SaaS platform is used by lots of users from all around the world and snowballed to become a $100,000,000 company in less than one year.

Also, what is even more surprising and exciting is that ClickFunnels was a self-funded project. That’s right; no joint ventures or Venture Capitalists were involved in this high technology project.

ClickFunnels, as a company, was launched in 2014. Russell did not get any financial assistance from anywhere, i.e., no outside venture capitalist funding, etc. which means he owns all of this behemoth company.

What made the company take off at such a high speed was that Russell has an email list of one million entrepreneurs, to whom he sent an email requesting them to join ClickFunnels. If you say his deep connection in the internet marketing universe helped to bring the SaaS company to life, you will not be far off the mark.

The concept that ClickFunnels rides on is the simplification of the design process, which helps users to generate clickable funnels that will subsequently result in massive sales.

Tripwire offers a low-ticket item like a free eBook. The Webinar is designed to sell the product, while the High-Ticket allows a user to sell high-priced products that range from $300 to $100,000.

In other words, ClickFunnels is designed for marketing, sales, and product delivery.

The Underground Playbook for building and Growing Your Company Online which he wrote in 2015. 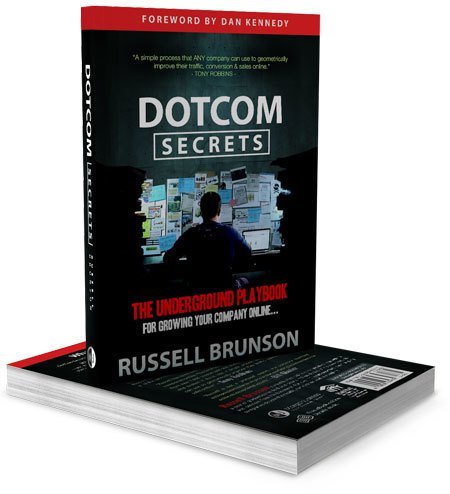 Since he was able to prove that he could sell services and products successfully, Russell Brunson went ahead to create what is known as “Dotcom Secrets” back in 2002. He travelled extensively around the country, sharing his in-depth knowledge of marketing via workshops and seminars.

Dotcom Secrets works in such a way that it teaches you how to set up a successful offline and online business. In most cases, the product is highly effective in delivering top-notch information and must be easy to use.

Dotcom Secrets book allows you to learn the simple basics of the value ladder along with various concepts, numerous case studies, etc. which would serve you exceptionally well for years to come.

The Underground Playbook for creating Your Message, Building a Tribe, and Changing the World, authored in 2017. 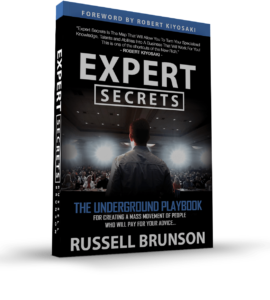 Expert Secrets is another of Russell Brunson’s best selling book. The book was published in 2017 and has more than 265 pages long. This is one of the best books ever for marketing your business.

It is not just for online marketing, it goes into more detail. It is absolutely perfect for any business owner who is looking for ways to grow their business.

If you are not using stories to sell your product, you will want to read this book on how to tell stories to double your sales.

The Inner Circle Program is another brainchild of Russell Brunson which has been of immense benefit to those who subscribed. It is a program that admits only 100 people at once.

The Inner Circle Program was created to help participants to discover how to improve website traffic as well as improve conversions over 12 months.

The program has recorded many successes and has even been endorsed by Tony Robbins. When a popular figure supports a program, there is no doubt that it will do well in the marketplace. Moreover, this is what happened with the Inner Circle Program.

And since he has more than one million entrepreneurs on his email list, he has repeatedly cashed in on this incredibly unique privilege by writing and selling books.

Today, Russell has been able to sell more than 250,000 copies of his books which focus primarily on marketing. His interest in selling books, however, developed while he was still in college.

Russell created a how-to booklet that promised to teach readers how to make money, i.e., $40 every time their pager rang. He received his first set of orders – up to 30 within 24 hours – and this proved to him that he was onto something worth pursuing.

Here are the other books that have been authored by Russell Brunson:

Russell only requires that interested customers pay a small shipping fee. His philosophy says that giving away high-quality and valued products for free engenders customer loyalty.

Russell Brunson also has several other ways of making money. One of such ways involves selling his services. You can hire his services or invite him to talk at an event for at least $100,000.

Do you want to pick his brain over lunch?

Well, you should be ready to shell out nothing less than $5,000 for an hour of his time. How about creating a funnel for you? Russell can do it for you at $250,000 and also get at least 10 per cent of the funnel’s gross sales.

Russell is also a brilliant trainer who you can hire to train your team or staff starting from $100,000.

There is no doubt that Russell is a great entrepreneur, capitalist, and highly efficient leader. He is an excellent example for anyone who wants to become a self-made millionaire.

Russell’s drive, hard work, and tenacity along with his intelligent mind have enabled him to create several business products which have added much value to people’s lives around the world.

Who is the owner of ClickFunnels?

The ClickFunnels is co-founded by Russell Brunson & Todd Dickerson.

ClickFunnels is sales funnel software– all in one marketing solution for entrepreneurs, marketers and business owners to market their products and services.

No. Brunson did not sell the Clickfunnels. The tool was entirely self-funded by Brunson’s Etison.

YES. ClickFunnels is 100% legit. Every marketers and business owners use Clickfunels to build landing pages to attract new visitors, sell their products and services.

[JOIN OUR NEWSLETTER]:And Learn How To Make Money Online